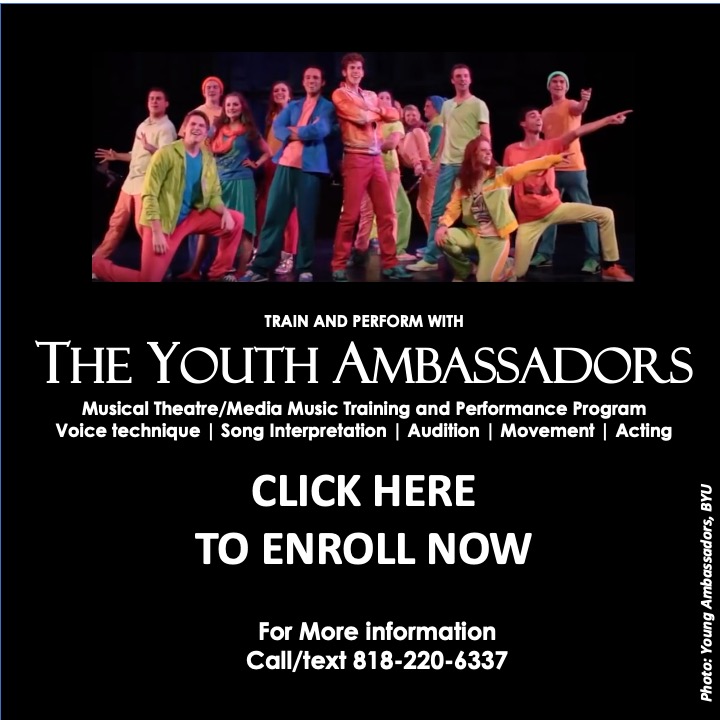 Because so many people ask me “what’s this about?” I’m posting a video of a group I performed with years ago, The Young Ambassadors.  In fact, I was among the founding members.  We were literally ambassadors for the US Department of Defense overseas.  I taught in this program, and this current group has just returned from a tour of China.

I have witnessed over and over again the power of music in easing tensions and strengthening relationships.  The world needs its youth to stand up and be a light and a positive influence.  This is my goal for The Youth Ambassadors.

When I taught at Orange County School of the Arts, I developed a syllabus for training across the skills needed for professional musical theatre, as well as directing a musical theatre group, First Act.  They performed a powerful trilogy of songs I arranged to pay tribute to the first responders and the families of victims in that horrific attack on 9.11.  The group became very popular throughout the Southland and made a huge impact on everyone that saw the performance.  This video is the song that opens our current show.  It describes our goals better than any words I could write.  Enjoy!  Then sign up here and get involved!  Make a difference in the world around you through your talent.  Go to the ABOUT tab for my bio.

WHAT PARENTS ARE SAYING

“The Youth Ambassadors has been the most joyful part of our daughter’s year!” – Jennifer S.

“We love how this is a small program with an incredible amount of one on one attention for the kids. We have really noticed our daughter’s growth. We also love that the kids have multiple chances to perform on stage and on YouTube. Other programs have had very few performances.” — Brandy M.

Children need time together.  When Covid 19 interrupted our classes and rehearsals, one parent said, “My child looks forward to the time she’s online with all her friends in The Youth Ambassadors, especially now that it’s the only way they can be together.”

Training in voice technique, song interpretation, movement, acting and life skills important to any field.  The groups will perform for private and community events throughout the year!  Enroll now!

AUDITIONS ARE ONGOING
No worries, if you have already talked to me by phone or in person, or if you do not have a photo, resume or self tape, or you have other questions, email [email protected] or call 818-220-6337

The self-tape is for voicing and placement in the classes.  Our goal is to like you and to be your strongest cheerleader and mentor.  Your goal is to be YOU and to do your very best!  It is going to be an experience of a life time and so much fun!

Cherilyn Bacon is a professional actor/singer, voice-over talent, producer and director who has directed youth ensembles since 1977 and taught private voice since 1999.

In 1997, Cherilyn was the Producer/Managing Director of Singers on Stage “On Broadway” Musical Theatre Workshops – New York City.  She worked with top Broadway producers, directors, music directors, choreographers and actors.  The program was rated best in New York City by Backstage and became Circle in the Square Theatre School’s summer musical theatre program.

In 2002 she was on the voice faculty at Brigham Young University, recruited to adapt the NYC summer musical theatre program into a Senior Seminar for the school’s top vocal students from opera to media music.  While there, she received highest student ratings.

Prior to that, she was on the faculty at California’s #1 performing arts charter school, the Orange County School of the Arts Conservatory in Santa Ana, California where she taught Voice Technique / Styles and Repertoire Classes.  She directed OCSA’s First Act ensemble, popular throughout Orange County post-9.11 and featured in local and national news.  She received highest student ratings, and several of her students have performed on Broadway.  She currently teaches on the faculty of OCSA’s new sister campus – California School of the Arts, San Gabriel Valley in Duarte.

She has taught private voice lessons in New York City, Los Angeles, and Salt Lake City and has recently re-opened her Los Angeles Studio in Glendale. She not only teaches voice technique, unlike most voice teachers, she also specializes in song interpretation across the classical, Broadway legit, belt, pop and character styles.  She teaches audition skills and prepares students for college auditions.  She develops musical theatre repertoire, teaches recording studio/mic techniques and the art of the cabaret performance.  She is certified to teach the total singer-actor, integrating the acclaimed principles of David Craig’s On Singing On Stage song interpretation for both audition preparation and performance.

Cherilyn was the director/manager for two ensembles, The Tax Deductions and The Rainbow Connection – Chicago, Illinois; Phoenix, Arizona.  These youth ensembles, ages 4-17, performed throughout the Chicago and Phoenix areas, partnered with Ronald McDonald House in Phoenix.

She has served as a youth and adult music and choir director for her church with congregations in Chicago, Dallas-Fort Worth, Phoenix, Irvine, and New Canaan, CT. While teaching the youth she was responsible for providing music for worship services, talent shows and annual musical presentations. Her techniques were incorporated into the church’s worldwide children’s music handbook. She and her family members are featured on the church’s children’s music CDs.

She was invited to conduct special performances at events such as building dedications and for worldwide and local church dignitaries. Among these performances, she conducted a 325-voice youth ensemble, ages 12-17 in a multimedia show A Time to Love, written by Warner Brothers musical director, film and TV scorer, Lex de Azevedo.  The chorus was invited to perform throughout the Dallas-Fort Worth region, featuring Dallas Cowboys Danny White at Six Flags Over Texas.  The group appeared on local Dallas news and CNB Television, with interviews on local radio shows.  The White House invited representatives to attend a youth summit in Washington DC.  The group was also invited to perform for the Tabernacle Choir during its Dallas tour.

Cherilyn has performed leading and supporting roles to critical acclaim Off-Off Broadway, in national tours, regional and community theatre in New York City, Los Angeles, San Francisco, Dallas, Palm Beach, Phoenix, Salt Lake City and Ogden.  She has also performed internationally with the USO.  National tours include Pal Joey and A Christmas Carol.  Principal roles include Joseph and the Amazing Technicolor Dream Coat (Narrator), Sondheim’s revised Southwest Premiere – Merrily We Roll Along (Mary), Baby (Pam), Side By Side By Sondheim, Hairspray (Velma), Into the Woods (Stepmother), The Sound of Music (Leisl), A Midsummer Night’s Dream (Helena), Ophelia (Gertrude), Oklahoma! (Laurie), Some Enchanted Evening: The Music of Rodgers and Hammerstein.  In Salt Lake City, she was the original Julie in the Utah production of the smash hit musical, Saturday’s Warrior music by Lex deAzevedo (The Swan Princess) and book by Doug Stewart (Where the Red Fern Grows).

She sings with the phenomenal Millennial Choirs and Orchestras and recently survived the NYC blackout while on stage at Carnegie Hall, ultimately taking to the street to sing an impromptu concert to millions as the story went viral across the Internet.

The purpose is to uplift and inspire young talent to be the best they can be, to change their lives and others for the better, and to help them live their dreams. The program builds confidence and teamwork, and follows enduring principles of life that will be there for them no matter what field they ultimately choose.

It is our unique format combining training with ongoing performance and our philosophy that distinguishes us from other youth training programs:

Possession or use of any of these harmful substances, including recreational marijuana, is prohibited and cause for immediate termination.

For a singer-dancer-actor the body is the instrument, and we only have one body to last a life time. Now is the time to establish good health habits.  Our bodies need proper rest, hydration and nourishment.  Please make sure your student comes to rehearsals and performances well hydrated and having eaten a nutritious meal.

I hereby waive, release and discharge any and all claims and damages for personal injury, death, or property damage which I, or my minor children, may sustain or which may occur as a result of my own participation, or that of my minor children, while registers in Strong Reasons, LLC d/b/a Singers on Stage Youth Ambassadors (SRLLC) during rehearsals, classes, performances or events.  I further understand and agree that:

I certify that I am at least 18 years old or I have custody or am the legal guardian of said minors by court order, and that I and/or my minor children are physically able to participate in the described activities.

I have carefully read this Waiver of Liability, Medical Release, Photography/Videotape Release and Indemnification Agreement and fully understand its contents. I am aware that this is a release of liability and a contract between myself and SRLLC, and that I sign it of my own free will. SRLLC may accept future phone, mail, online, or in-person registrations under these provisions.

I also certify that I have read the Policy Handbook and I understand the Refund, Late Fee, Probation and Termination Policies and the potential consequences thereof, set forth by SRLLC and that I agree to such terms.